Venice’s long rule on the west coast and in Istria’s interior has left a trail of architecture and monuments...

Venetian culture contributed greatly to Istrian artistic heritage, even though the Venetian Republic never completely ruled over the Istrian peninsula.

The towns of western Istria came under Venetian rule during the 13th century, Pula at the beginning of the 14th century, while Plomin and Labin were annexed to the Republic in 1420.

The dominance of Venetian architectural forms, which mark all the streets and squares of Istrian towns, was seen from the beginning of the 15th century. Multistorey houses with wide, adorned windows and balconies in the Venetian Floral Gothic style were built in even the smallest Istrian towns. The most beautiful examples of Venetian palaces, although dimensionally modest, are those in Poreč. 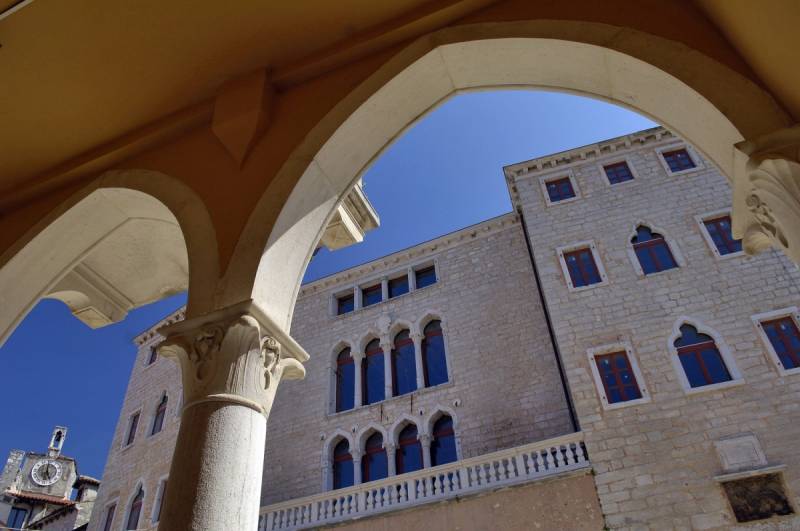 Istrian palaces somehow differ from those in Venice. They were built of chiselled, proportioned stone blocks, making them more solid and compact, whereas the elegant stone framework of Venice was built using walls of brick.

Venetian palaces in Istria were not so much Venetian because of the need to accept the artistic model of the capital, but more for practical reasons.

Blocks of sturdy limestone had been transported for hundreds of years from Istrian quarries to Venice, and Venetian stonemasons and builders came to the quarries where the rock was cut by Istrian stonemasons.

Venetian skilled workmen made the stone shapes in the manner as it was done in Venice, but at the same time, there is evidence of numerous skilful Istrian stone-cutters who worked at construction sites in the metropolis.