Every summer one street in Rovinj becomes the most colorful outdoor gallery. Create a work of art in a day and exhibit it wherever you want in a narrow street full of passers-by.

The second Sunday in August is a special day for Rovinj. In Grisija, a narrow street connecting the main town square and the Church of St. Euphemia, an explosion of creativity takes place from early morning to late afternoon. Professional artists, amateurs and children together exhibit their works of art for visitors flocking to the narrow street. 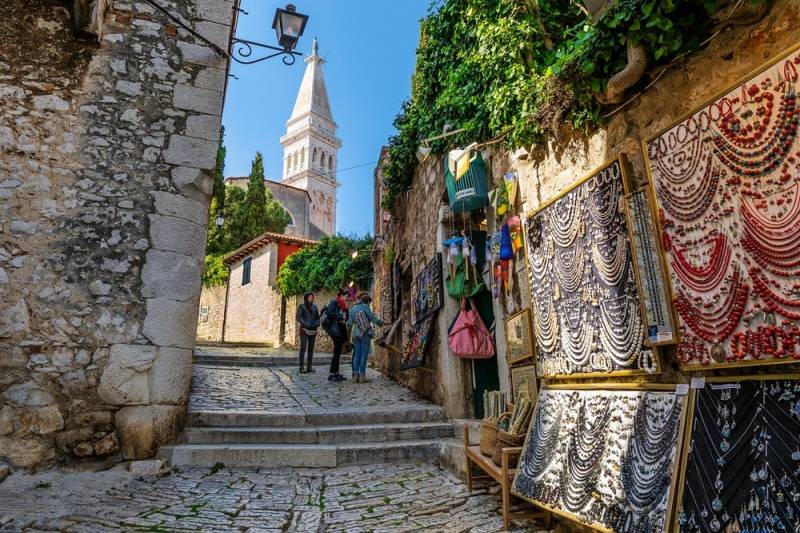 On that day in August, the street paved with shiny stone comes alive with a special glow. The walls of houses, doors, windows and shutters are decorated with numerous paintings, sculptures, installations and other colorful objects – the creations of artists from all parts of Istria, Croatia and abroad.

Art works thus complement the splendid mixture of styles on old buildings in Rovinj, which combines Gothic, Renaissance, Baroque and Neoclassicism features. Among colorful art works and ornaments on facades, you may notice unusual chimneys, fumaioli, outside chimneys built when the town population rapidly increased and entire families lived in one room with a hearth.

How did Grisija become a gallery?
As the story goes, the first Grisija took place in 1967, after the ship Liburnija arrived in Rovinj from Venice in 1966. There were 120 American tourists on the ship and they visited Rovinj, which was at the time considered a big sensation.
Walking the streets of Rovinj, which were always inhabited by a large number of artists, American tourists were captivated by the town of artists and bought their works. This prompted the Istrian artists to organize the first one-day outdoor exhibition in 1967, and the rest is history.

Take part in Grisija and win a prize!
Grisija is a competitive exhibition in which you can take part regardless of whether you are an amateur or professional artist.
Applications are submitted in the morning on the day of the competition, after which artists show their works in any available places on the Grisija street, around the Church of St. Euphemia and on some of the surrounding streets.
Most of the available walls at the beginning of the street are already taken the day before by local artists who have been exhibiting in Grisija for years, even decades. Be patient and you will surely find your own ideal place.