The Church of St. Nicholas is a small Romanesque edifice with the inscribed apse and a bell gable. It was commissioned in the 14th century by a Motovun branch of the Venetian family Barbo, who must have also commissioned the frescoes from a superb master. It is located at the cemetery. The frescoes were discovered in 1925 by the Istrian reformer, priest Luka Kirac. Until recently they were mistakenly considered painting of Giotto's tradition. These are among the few preserved frescoes in Istria of undoubtedly Venetian origin.

The scenes depict the legend of St. Nicholas. The one presenting the birth of the saint on the southern wall is one of the best preserved scenes in this cycle. It is presented within the architectural frame where the bed of the child-bearing woman, with suspended draperies above, is in the foreground. St. Nicholas's exhausted mother lies touching her newborn son. Among the figures in the background especially interesting is the woman approaching the saint's mother holding a dish with a roast chicken. In the scene of St. Nicholas cutting the tree, the best preserved are the heads of townspeople watching from the town gate as the saint drives off pagan demons that lived in the tree. Scenes of the saint's life are painted in a relatively wide range of colours and shades, with firm strokes. Figures are defined by clear volumes, movements are defined by action, and faces have distinctive features. Complexion is achieved by a contrast of pastel green and rosy. The volume is outlined in dark lines, in contrast with the lighter coloured lines. Saints similar to the ones in the nave are partly preserved in the apse, yet in somewhat livelier colours. This is most probably because they were restored at a different time and using different material. It was believed that these figures were painted by another workshop, but Morellian analysis of details, especially the goiter necks, beards and hair executed with undulating lines, fleshy lower lips and ears, and moustache in the shape of a fish tail proves that the entire cycle was painted by the same master. The finely shaped hand of the saint in the apse, captured in an elegant gesture of a male model, best reveals the painter's talent.

How to get there:
On the local Višnjan-Karojba road, nearer to Karojba, turn when you see the next sign and you will soon be in Rakotule. The Church is located somewhat outside the village, at the end of the road leading to high cypress trees and the cemetery. 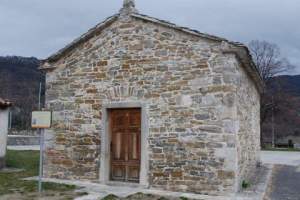 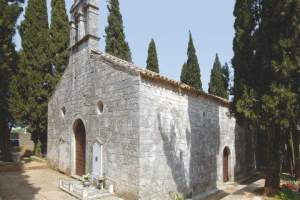 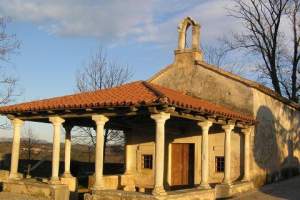 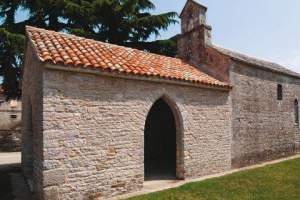 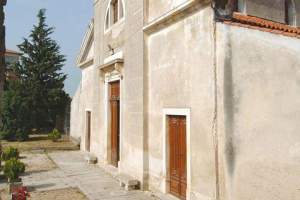