Almost every Istrian village has its own church, and each church has its own bell tower, the so-called kampanil. Like jewels in a crown, they enhance the landscape along the Istrian peninsula...

With their different shapes, heights, and age, you will encounter them on every corner of Istria. And each of them is unique in its own way: one hundred and forty-three bell towers create the most stunning panoramas of Istria. Usually made from stone and sometimes with build-in clocks, bell towers in Istria can be seen as part of a church or next to town halls. The bells are located at the top of the tower, where open, window-like spaces were built to carry the sound of the ringing bells as far as possible.

If you happen to stroll past one of them, make sure to stop and look up - they will surprise you, each and every one of them in its own special way... 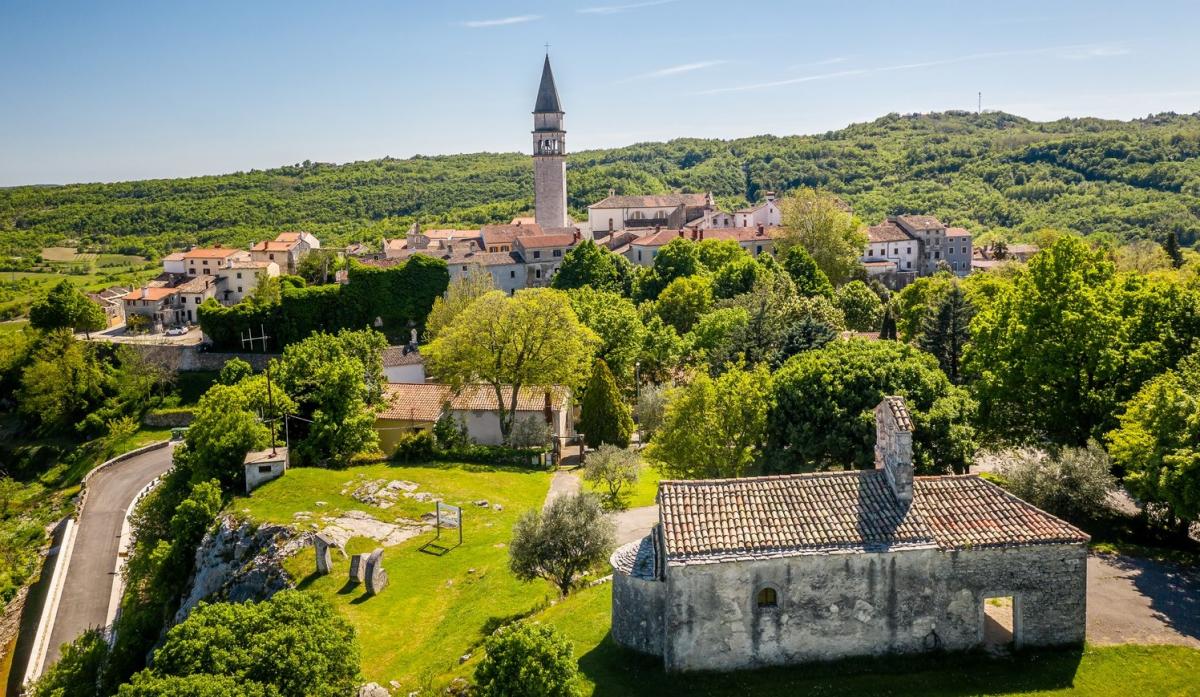 Pićan-Pedena
Due to its strategically important location, Pićan was the site of a prehistoric hillfort, which served as a military stronghold in Roman times.
The historical sites include the partially preserved medieval walls and town gate from the 14th century with the former Bishop’s Palace, the Church of St. Roch from the 17th century, St. Michael’s Church at the cemetery with frescoes from the 15th century and the Parish Church built on the site of a cathedral dating from the 14th century. The 48-meter-high bell tower was constructed at the end of the 19th century and is one of the tallest bell towers in Istria. Next to it is a stone measure which was once used for collecting the tithe. 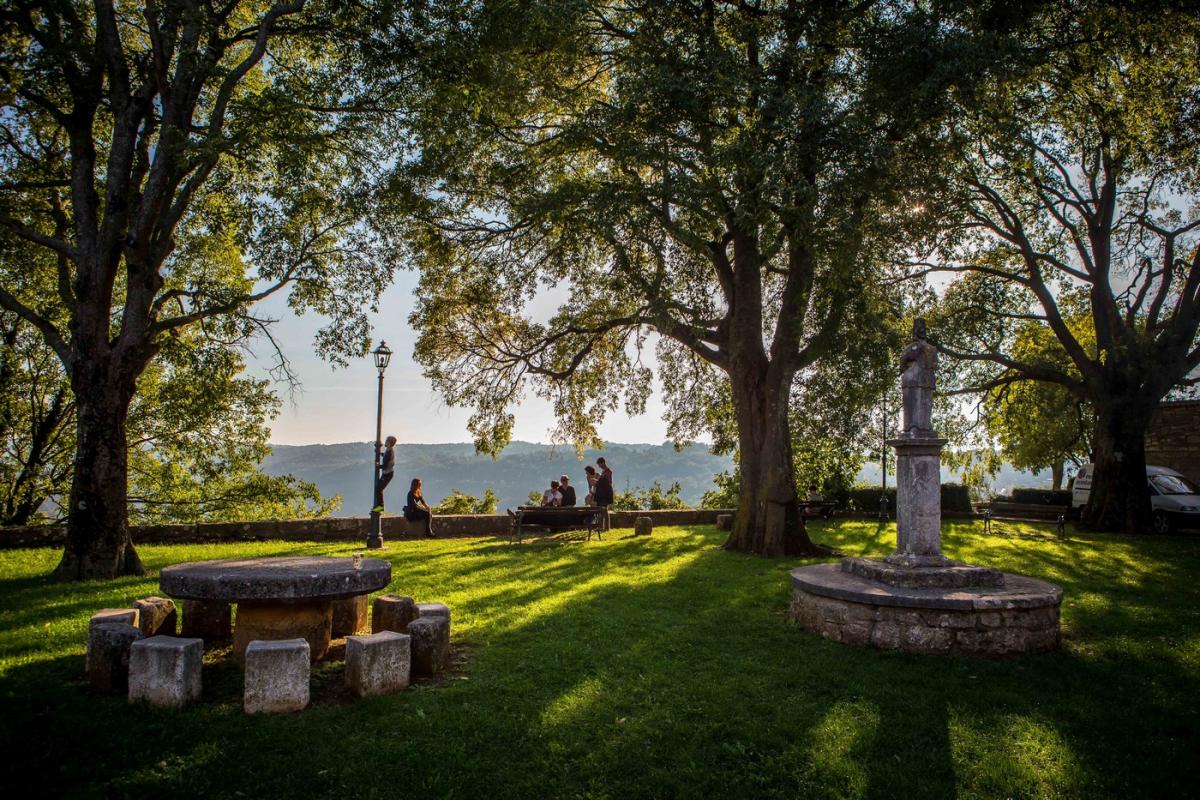 Tinjan-Antignana
Records of the town’s history date to 1500 BC, which is testified by the tomb on St. Špeta hill. During Roman times a road connecting Poreč and Pazin passed here. Although it was situated on the border, Tinjan was not an ordinary fortress, but instead was considered a town in the 16th century. It was surrounded by a moat, while just one gate, a drawbridge led into the town. Tinjan also had a loggia with a pillar of shame in front of it. Not many people know that during the 15th century a system of underground tunnels was built, which connected all major parts of Tinjan.

During the Middle Ages, Tinjan and Gračišće, were two of the wealthiest towns in Istria. Some of the attractions from its rich history are the Prefect’s table under the hackberry tree (ladonja), Parish Church of SS. Simon and Jude the Apostle from the 18th century and a separate 28-meter bell tower which differs from most Istrian bell towers by its crenelation, which adds a unique touch to the panorama of Tinjan. 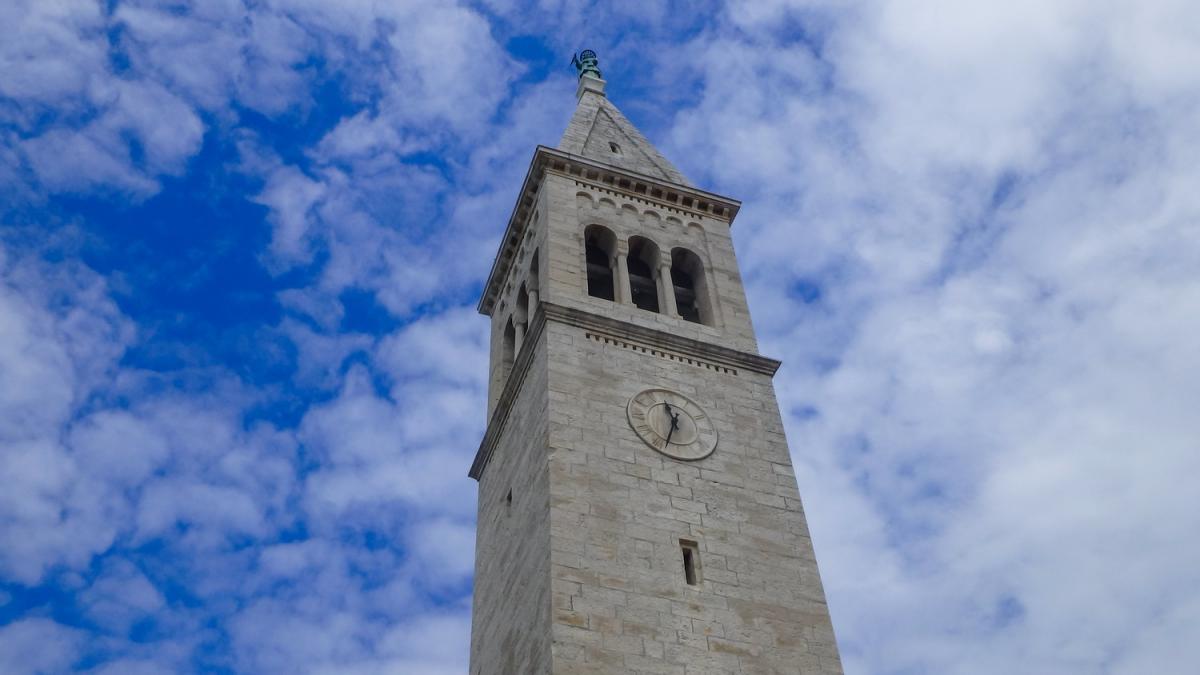 Novigrad-Cittanova
The old town of Novigrad was once surrounded by defensive walls. The town was fortified in the 13th century with the coming of the Venetian rule. Once, all festivities and ceremonies were held around its bell tower, which was constructed in 1883. The statue of St. Pelagius, the patron saint of Novigrad is placed on the top of the bell tower. During the summer months, visitors can climb to the top and enjoy the beautiful panoramic view.

Karojba-Caroiba
Karojba is located on the forest hills around the Valigaštar and Vrućak springs. All these hills have been inhabited since prehistoric times but razed to the ground on several occasions making it difficult for the historians to put the fragments together into a genuine story. The majority, however, agrees that, in Roman times, the area around the spring of Valigaštar had a Roman military camp near which Roman roads crossed, so the modern-day name probably derives from the Roman name Quadrivium, meaning ‘crossroads’.

Sveti Petar u Šumi - San Pietro in Selve
Sveti Petar u Šumi got its name after the Benedictine monastery, which appears in historical documents from 1174 with an unclear note on its 50 years of existence. Unlike other Istrian villages and towns where a settlement was built on a hilltop with a church and its tower, at Sveti Petar u Šumi there were no houses around either the church or the monastery.

When the interest in the Benedictine order faded and the monastery was abandoned, in 1459 Emperor Frederick III handed the monastery over to the Paulines, the white monks, who restored it. Interestingly enough, they rearranged the cloister by putting the new Renaissance columns on the ground floor and moved the old Romanesque ones to the floor above. At the same time, the Paulines restored the monastic church of the Holy Apostles Peter and Paul in gothic style. The monastery was burnt and partially destroyed in the Uskok War in 1616. Its renovation began in the mid-17th century. In his work The Glory of the Duchy of Carniola, Valvasor does not attach much significance to the monastery, mentioning only a peculiar fact that in the monastic church no one had ever seen a spider! 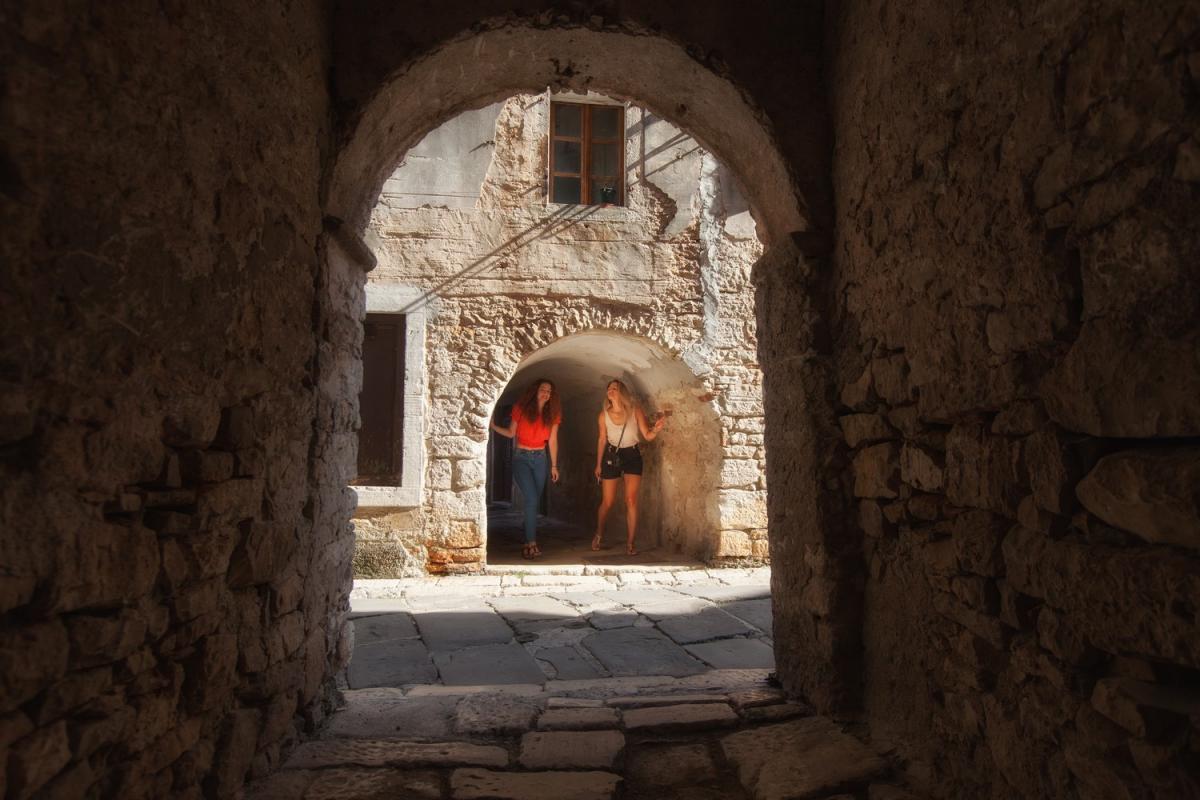 Vodnjan-Dignano
The town of Vodnjan reveals views on small stone streets formed on the traces of prehistoric forts. In 1800, after 40 years of construction, 13 thousand golden ducats spent, as well as ten years of charity donations of its inhabitants, the church was consecrated on the feast day of St. Blaise. It was worth the effort because at the site of the former church, a magnificent and well-proportioned basilica was built. By the size of its ground plan (56.20 x 31.60 m), and the 25 meter high cupola, the parish church of St. Blaise is the largest parish church in Istria. Furthermore, it is the church with the tallest bell tower of 62 meters, resembling that of St. Mark’s in Venice.

Sv. Lovreč - San Lorenzo del Pasenatico
The very fact that Sv. Lovreč is one of the best preserved medieval fortified cities and the first organised municipality in Istria, it is an attractive invitation to visit it as soon as possible. The circular form of the settlement, which was named after the church of St. Lawrence, dates back to prehistoric times. The oldest frescoes in Istria are located in the parish church of St. Martin, whilst Plac, the old town square will conquer you with its charming look.