The Istrian prosciutto is considered one of the most healthful cured meats in all of the Mediterranean. In Istria, the pig used to be like a member of the family - pigs usually had at least one cooked meal every day. Methods for removing the skin, using the ''kasela'' (wooden form), creating a rub with salt, pepper, laurel, rosemary and sometimes garlic, and drying the ham in the bura (cold, north-eastern wind) remain closely guarded secrets unique to each farmer in the preparation of prosciutto.

Špaleta
The alternative for the prosciutto was the špaleta, the shoulder joint, the front pig’s trotter, the little prosciutto. Like in the Slavonian cuisine there are the kulen (type of flavored sausage made of minced pork) and the kulenova seka (literally kulen's little sister; when the kulen meat is stuffed into a smaller intestine), the same relationship exists between the pršut and the shoulder joint, which, even though smaller, is of the same quality as the pršut. Due to the fact that it is smaller and with more bones, it matures earlier and is traditionally consumed during Easter.

Without a question, one of the most important specialties of traditional Istrian cuisine is pork. Slaughtering and butchering the pig was a ceremonious ritual in rural households, yielding ten to fifteen products to be enjoyed for weeks or months. Today, fewer pork products are prepared with the most important being the pork thick neck (zarebnjak, ombolo or žlomprt), sausage (kobasice) and streaked bacon (panceta).

Kobasice
Istrian sausages are made from choice pork meat spiced with a mixture of salt, pepper and wine, in which are boiled few bulbs of garlic, a pair of laurel leaves and a small branch of rosemary. The liquid poured over the meat which is then well mixed and stuffed into sausage casings. The sausages are dried for fifteen days and normally prepared on the grill, boiled with cabbage, broiled with eggs or, when sufficiently dry, served “raw”.

Panceta
Streaked bacon is traditionally made the same day the pig is slaughtered. The distinction between streaked and back bacon would be made with an incision at the hips. The streaked bacon is rubbed with salt, ground pepper and finely crumbled laurel leaves before drying for about fifteen days. In some areas of Istria it is dried as a slab, while in other areas it is rolled and tied or put in a thick casing to preserve its rolled form. 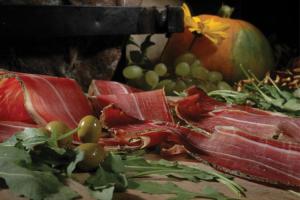 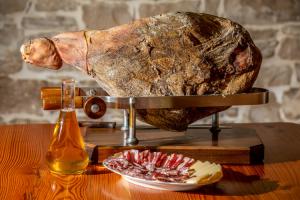 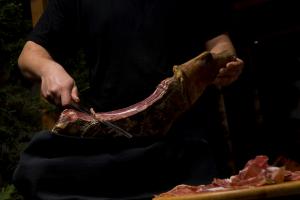