On the west part of the peninsula, in the historic core of Umag is a square closed building which used to be a fortification structure. Today it is the Museum of the town of Umag. The medieval tower, known also as the bishop's tower, was erected on the transition from the 13th into the 14th cc. It is thought to be the oldest structure in town. It was originally used as a fortress for defending the town from the sea. Some other parts of the town walls can also be seen. Its present day appearance dates to the 19th century, when the roof was built as a replacement for the then existing defensive parapet.

The bishop's tower is a three-storey building, which floors are connected with a wide indoor staircase . Only the ground floor has a separate entrance. The latter is today a lapidarium, the collection of stone monuments, which unfortunately and due to technical conditions, is not open to public. The permanent museum exhibition is on the second floor, while the first floor is used for visiting fine arts and historical-archaeological exhibitions. 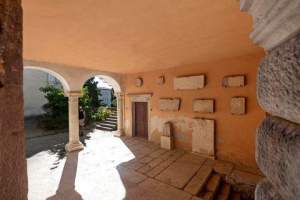