Home / Experience / Sports and Outdoor / Trekking / Hiking trail: Across the Lagunas
Share with

Starting point is in front of the supermarket by the parking lot in Plava Laguna left towards the sports center and continue on in the direction of Zelena Laguna on a marked paved walking-bike path around the bay of Mulandrija passing a little bridge over the stream St. Anđeo to the entertainment center Club International then right along the sea to the ski lift and further on along the shore bellow the Hotel Laguna Molindrio towards Hotel Parentium.

It continues to the right by the Marina Parentium around the peninsula to the Villa Romana restaurant. There is an interesting composition of three obelisks decorated with mosaics, the work of the famous Croatian painter Edo Murtić, and about 50 meters away, along the cape called Rt. Zorna, there are the remains of an ancient  villa rustica (Roman) stand. A paved path next to it leads by the beach bellow hotels Plavi and Zorna around the Zelena Laguna bay to the Lotosi sport center.

Continuing on the paved path along the sea around the peninsula to the cape Debeli rt, pass the Delfin sport center to the fence of the auto-camp Zelena Laguna. By the aquagan (water slide) turn left up a mild uphill to hotel Delfin and a 100 m right through a land trail to a paved road with a walkway which leads down to Hotel Albatros then left around minigolf and tennis courts to the Zelena Laguna information office.

The trail length: 4.500 meters in one direction
Walking time: from 1 hour and 30 minutes to 2 hours
The return: Bellow Hotel Zorna and Plavi the same trail back to Plava Laguna. During the summer season from (May to September) a tourist train drives from Zelena Laguna (starting point 100 m north of Hotel Plavi towards Hotel Laguna Molindrio) to Plava Laguna (right to the starting point of the described trail). From the pier in the bay of Zelena Laguna (by the Villa Romana restaurant near Hotel Parentium and Lotosi Sport Center) a small passenger ship sails to Plava Laguna. A few times a day a local bus drives from Hotel Delfin to Plava Laguna. All kinds of transportation are possible to Poreč as well.

Notes: For the most part the trail is lit up at night, the trail route from Plava Laguna to Hotel Parentium is very suitable for roller-skating. Along the whole trail during the summer season there are numerous sports centers opened on land and at sea.
About 50 m away from Hotel Plavi there are stairs which go up the 38 m long hill where a chapel of St. Nikola with a bell tower is situated. There are 173 stairs to the top of the hill with a few resting spots along the way and lighting. The bell tower has extra 86 stairs and from the top there is an exceptional panoramic view over the central part of western Istria. It is open during summer season.
The peninsula where hotel Parentium is located is fenced off. Usually there is a free entrance but on occasions it is possible that it will be locked. Then you must turn left from the hotel towards the three obelisks and further on according to the described itinerary. 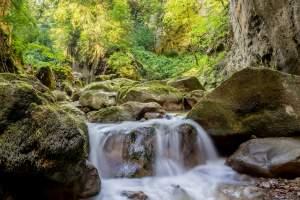 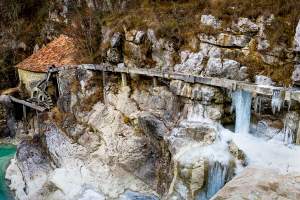 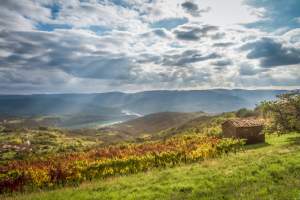 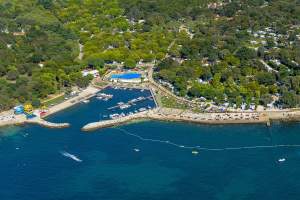 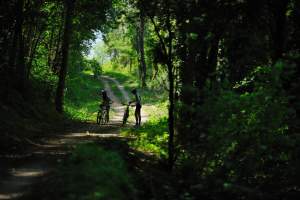